Well the year is quickly coming to an end and I’ve only posted one blog which was also the case in 2014 when I said that I wanted to start writing again! I suppose there’s many reasons (excuses) some valid and some not, but the bottom line is that I can’t really call myself a blogger anymore. Fortunately this is something that I can change so I’m squeezing in one more blog for 2015.

VINDICATION BUT NO JUSTICE


A year has gone by since my last blog, boy a year goes by fast! I suppose a lot has happened in the last year, but the focus of this blog won’t be on my personal health but rather on the debacle created by Doug Broeska. It all started in January of this year when the wheels began to fall off the story train of Dr. D and Regenetek. The credentials of Broeska began to come under scrutiny precipitating a review of his entire organization, and his past. This is when all of the lies started to surface such as his claim to a bogus PhD, as far as I know the man doesn’t even have an undergrad degree! This is only the tip of the iceberg that is made up of a mountain of lies, deceit, slander, and what I clearly classify as fraud. As the story progresses and more facts come out, we have the making of a good book or movie.
I had put the whole India experience behind me when all of my efforts to expose the truth behind this operation turned up nothing but false hope. I truly felt that what Regentek and Doug Broeska were doing was fraudulent and criminal. I filed a complaint with the RCMP and with Health Canada, but after weeks of no response or willingness to initiate an investigation, dejected and disappointed I decided to put it all behind me. I stayed clear of all the websites and Facebook pages for almost 8 months so that I could clear my head of all this crap and focus on my health. Then once the story started to surface about Doug’s bogus credentials I was dragged back into the fray of things by requests for interviews. Once I got my head back into the story and began talking with former patients I saw a light at the end of the tunnel.   All of Doug’s lies were being exposed, past patients were coming forward with truth, the story was being reported in the media and I was finally reassured that an investigation into the matter was underway. Everything about this story was initially documented in my original complaint to the RCMP and Health Canada, but unfortunately nobody was interested in listening to me at the time. It wasn’t until the aftermath of Regenetek and Doug’s demise that people came forward wishing they would have heeded my warning. I figured out Doug’s scam while I was still in India, it became obvious to me that there was no legitimate study being conducted. When I returned home to no follow-up and no willingness to accept the simple fact that the procedure did not work on me I knew something was wrong. Doug insisted on maintaining his claim that ALL patients had improved post procedure. I knew this was false because it had not worked on me and I knew of several other patients that had no improvement, all of which Doug was fully aware of. The issue is that nobody else was aware of this fact because if anyone claimed they saw no improvement or questioned the procedure in any way Doug would simply disqualify them from his so-called trial. It was completely clear to me at this point that there was no legitimate trial and the whole procedure was suspect in my mind. 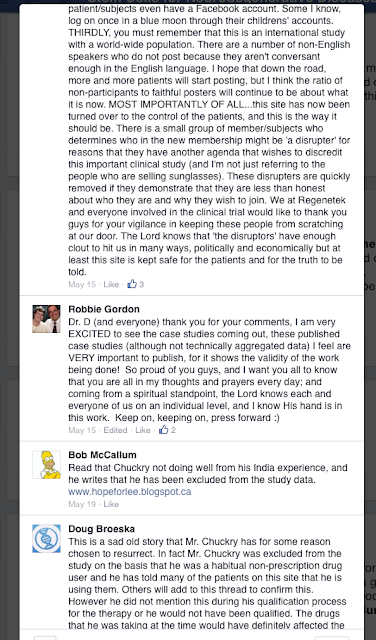 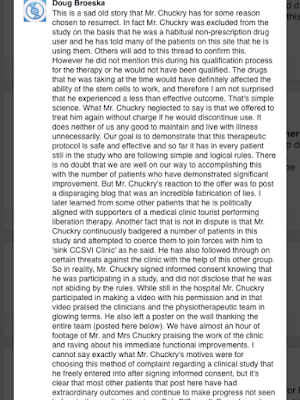 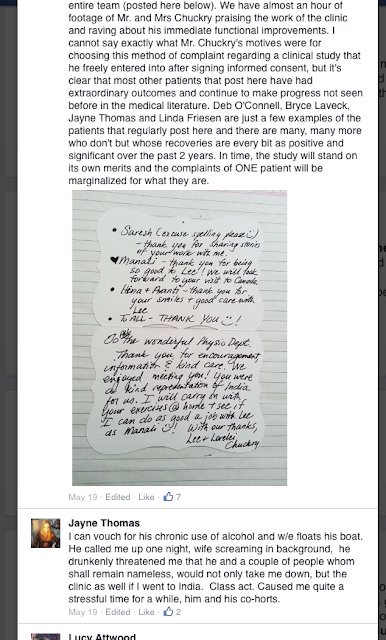 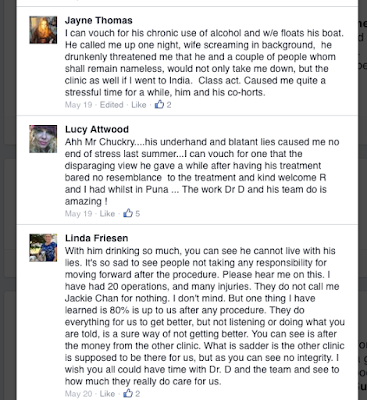